Or send us email:

A Walk Through the Graveyard of Empires

29 Sep A Walk Through the Graveyard of Empires 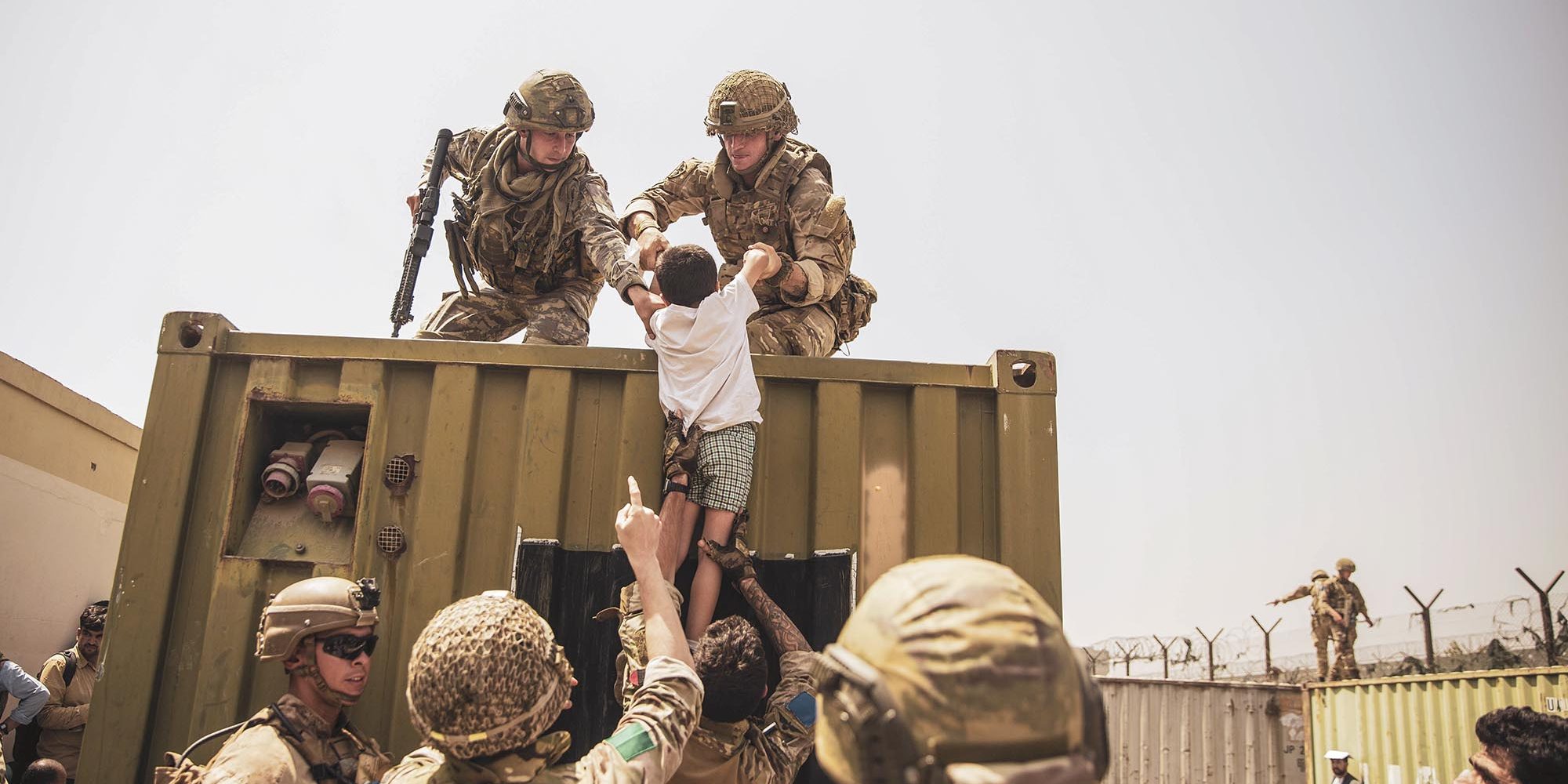 The first Afghan I ever met was in Pakistan some thirty years ago. He was my age, thirteen-ish, and busy throwing a puppy in the air—chuckling at how it squealed when it hit the cratered road in front of our house. In a storm of righteous pique, I snatched it away and brought the scrawny thing into the safety of our walled, gated, United Nations-provided home. The kid was not, I’m afraid, especially devastated by my moralizing glare and sauntered back to his tent across the street—vanishing into the scrum of ramshackle domed refugee huts covered in scraps of cardboard and multicolored rags. What unspeakable traumas he had lived to be so callous to a baby hound, I’ll never know. What unimaginable prosperity and insulated comfort I had lived to be so naïve, he could only guess. Some hint, perhaps: every morning kids picked greedily through the garbage we threw over the wall. We played with them sometimes but demurred after their first offer to visit their camp: the place was a minefield of human excrement, and I didn’t want to risk my new leather chappal sandals.

This was 1991, a decade before Afghanistan entered mainstream American consciousness. Thirteen years later, I once again met Afghans, this time in-country, this time in combat boots, Kevlar armor plates, and a Berretta 9mm in a new leather holster. I loved it there: the people, the landscapes, the adventure, the kabobs and naan the interpreter snuck to me in greasy local newspaper. Mine was a refuge camp: a scrum of huts with muddy lanes, a Hesco barrier to keep out bomb attacks, and various allied headquarters covered in camo-netting and multi-colored flags. No dogs allowed. A mountain of pale blue plastic Nestlé water bottles towered a block away—an enterprising “haji” (they were all haji to us) was combing through Camp Phoenix’s trash. Maybe he turned them into those powder-blue burqas we thought. God knows.

As I try to explain to my thirteen-year-old what is happening in Afghanistan today, it goes (can only go) something like this: we spent a trillion dollars and 6,500 American lives over 20 years because 19 terrorists from Saudi Arabia, UAE, Lebanon, and Egypt killed 3,000 people in New York, Pennsylvania, and Washington, DC. We didn’t want the bad guys, who were Arab, to have a safe haven in Afghanistan (which wasn’t) to plan another attack. Ten years after our successful invasion, we finally managed to wring the neck of the ringleader. In Pakistan, forsooth. See?

None of these muffled ambiguities especially plagued my mind as we locked-and-loaded for convoy missions to Herat, Mazar-e-Sharif, Konduz, Khost, Kandahar, and the rest of the vaguely exotic places now headlined in the Taliban takeover. How we ached for someone, anyone to just-try-it-and-see: to get at least a few rounds off downrange, preferably in some Purple Heart dustup that would make the folks back home proud to know you. Recall that day we were almost to Kandahar, where a bushy-bearded dad smacked down his boy’s hand when the kid tried to wave at us? Just before our Humvee took a glancing potshot off the back-end and we didn’t even slow down? Or the day we heard that the Danes (the ones with the beer) got attacked by a crazy pistol-wielding grandfather, irate about the French convoy that ran over his granddaughter? What a nut-job.

Back from the “war”: first-to-board at gate C9 and “thank you for your service”—cringing inside about the ludicrous calculations I had done over combat-zone pay and mortgage payments. Saluting the flag at July 4th ceremonies and school auditoriums—a swell of pride for having defended freedom. Freedom. I later wrote a B+ thesis on the Bush Doctrine, comparing the then-new National Security Strategy, sprinkled with aspirational abstractions like Peace and Liberty and “free and open societies on every continent,” to the Truman Doctrine. Later, much later, as an eager scholar at a really nice hotel on the beach, I heard words that rumbled like thunder: “Maybe a National Security Strategy should be one-line: ‘We intend to live as free men and women in the continent of North America.’” A startlingly, refreshingly, simple concept. What would it feel like to be ruthlessly neutral—perched atop our city on a hill, like the Swiss on their plateau, busily minding our own business? I have no idea. No one does.

The idea was to make the world safe. The 2002 National Security Strategy claimed that “In a world that is safe, people will be able to make their own lives better.” Indisputable, as far as it goes. The document went on:

The great struggles of the twentieth century between liberty and totalitarianism ended with a decisive victory for the forces of freedom—and a single sustainable model for national success: freedom, democracy, and free enterprise. In the twenty-first century, only nations that share a commitment to protecting basic human rights and guaranteeing political and economic freedom will be able to unleash the potential of their people and assure their future prosperity. People everywhere want to be able to speak freely; choose who will govern them; worship as they please; educate their children—male and female; own property; and enjoy the benefits of their labor. These values of freedom are right and true for every person, in every society—and the duty of protecting these values against their enemies is the common calling of freedom-loving people across the globe and across the ages.

It was the last bit that paid my way to Afghanistan: this “duty of protecting” the values of freedom. The strategy laid out a framework for America’s responsibilities in a world in which it had no military or economic rival:

Today, the United States enjoys a position of unparalleled military strength and great economic and political influence. In keeping with our heritage and principles, we do not use our strength to press for unilateral advantage. We seek instead to create a balance of power that favors human freedom: conditions in which all nations and all societies can choose for themselves the rewards and challenges of political and economic liberty.

The rise of China in the intervening decades makes the “unparalleled” claim feel distinctly nostalgic. And the number of healthy, very healthy, military contract holders and medaled generals playing golf right now calls into question our national abstention from “unilateral advantage.” The NSS went on:

The jury is distinctly out on whether this noble goal was promoted or not. Many terrorists have died, and many more have filled their shoes. Tyranny seems to be on the upswing rather than retreat, from the South China Sea to the Baltic to the Caribbean. Good relations among the great powers seems tenuous at best. Many a schoolgirl gained a shot at literacy in Jalalabad and Gardez, but a goodly number lost it in North Africa and Xinjiang.

After our exit from Afghanistan, the finger pointing and the round condemnation of “bumbling, fumbling” leadership began. As if we all secretly knew the right answers all along and it was just that nobody listened. So much ink spilled, most of it self-absorbed chaff like what you’re reading now . . .

What if the “failure of leadership” was inevitable? What if international “order” is a bus that can’t be steered? What if it is instead a chaotic kaleidoscope of self-organizing actors that feeds on violence—a hydra, or a black swan, of our own myopic making? What if the astute and vaunted cognoscenti in international relations are no better than stock pickers for our retirement portfolios—no better, on average, at managing positive outcomes than pure chance?

This is not, I trust, some cynical eulogy to a failed “American Mission” in Afghanistan. I believe in the exceptional American idealism that helped airlift 110,000 Afghans from harm’s way. A baby girl named “Reach,” born on a C-17 out of Kabul, perfectly embodies the spirit of capacious consideration we hold dear. It is right and good to wish to be right and to try to do good.

But we need a frank recognition of the limits of intelligent management. Organizing a globe along rational lines is a comely concept, but like Keynesian plans everywhere, finds itself wrecked on jagged, Hayekian shores. We cannot even presume to know the particular needs, aspirations, or smoldering grievances of any given group, let alone manage these yearnings toward any coherent harmony. We can, however, respond adaptively: infiltrating and intercepting those who would harm us, responding powerfully when they do, but most of all by cultivating the broadest marketplace of international commerce. Trade and prosperity are a remarkable tonic to absolutist ideology (witness Xi Jinping’s frenetic efforts to reign the capitalist tide tearing at Communist moorings), “building nations” just doesn’t seem to do the trick. I recently opened a tent kit: items tumbled out from Kosovo, Vietnam, Japan, and Germany—someone said the surest road to economic development in the modern era is to be invaded by America. True, but only half at best.

The only Farsi phrase I can conjure now is “estawd sho, ya serat fire mekanuum—Stop or I’ll shoot.” I came back from Afghanistan with some lovely rugs and an 1871 British Enfield rifle, appropriate war mementos in hindsight—flotsam of the British exodus from the graveyard of empires wrapped in the lasting fabrics of an ancient people. A century from now, someone will no doubt be buying a dusty American-made M26 with laser rangefinder at the Friday bazaar in Peshawar. But, God-willing, instead of a warrior-wannabe, it will be a prosperous young antiquarian in search of mementos of a sillier, more reflexive age.